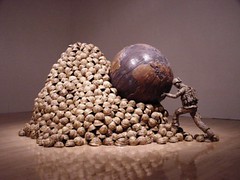 When I woke up this morning, I’d resigned myself to not blogging about today’s presidential inauguration.  Not because it’s not special or blog-worthy, of course, but because it’s going to get so much attention that I just didn’t think I’d have much to add. However I just read Aaryn Belfer’s latest post about how Obama has inspired her to take her kids to pick up trash around her neighborhood and it reminded me of my days in San Francisco.

As part of my morning surf routine at Ocean Beach I would walk the beach and pick up trash after getting out of the water.  There were weeks when I’d clean the same quarter-mile stretch every day and, every day, remove just as much trash as the day before. The beach would be clean when I was done and, yet, the next morning there would be a new fire pit full of broken glass and nails from burnt out shipping palettes, the residue of some teenage partiers;  or a new shopping cart, forgotten by some bum, would be half-buried in the sand; or, most frustrating of all, the countless bits of plastic and styrofoam that washed ashore from God knows where.  Morning after morning, the shoreline would be lined anew with an unending string of bottles, water jugs, six-pack rings, Pringles cans, fishing line, and other detritus – the flotsam and jetsam of the modern age brought ashore on the majestic rise and fall of our tides.

Those days on the beach gave me a new appreciation for Sisyphus, strangely casting his plight in a kinder light.  Where before I had felt pity for this mythical figure damned to an eternity of futile struggle, I came to realize that he may in fact have found an inner-peace. Sure, his task was unending and, on the surface, completely pointless, but surely there is a purpose to all things, right?  I like to think that Sisyphus eventually discovered his purpose: that he needed to learn the error of his ways (having been a generally nasty person in his pre-damnation life).  I imagine that he eventually realized this and came to terms with his plight:  Sisyphus, toiling forever under a boulder, but with a quiet smile on his face, knowing that he had found meaning in what he was doing, no matter the outcome.

Picking up trash is not as symbolic as Sisyphus and his boulder and mountain, but it has that same unending quality to it.  No matter how hard you work, there is always more.  Do it long enough and you will eventually stop wondering where the trash comes from and who these people are who so callously throw their… their crap everywhere!  And so, too, will you stop casting subtle, resentful glares at the people who go by you with neither a care nor a word for the work you are doing to improve their community.  Eventually the act of picking up trash becomes simply a purpose unto itself.  You do it because it is the right thing to do.  You do it for your karma, and because the act of doing somehow makes the world a better place, no matter how intangible that change may be.

This zen state makes those times when your work actually does make a difference special.  The all-too rare “thank you” from a stranger takes on a new, more sincere meaning.  The even rarer times when someone stops to help you creates an instant bond with that kindred spirit.  These are important changes, however illusory they may be.

So, to Aaryn, I will extend a heartfelt, “thank you”.  I only wish I could have been there to help.

So too will I extend thanks to Barack Obama, soon to be Mr. President: It is amazing how serenely you bear the hopes and the expectations that we Americans have piled before you – a Sisyphean hill if ever there was one.  I have no idea how you intend to climb it, or if, against all odds, you will be successful, but I believe I recognize that quirky smile you so often wear.  Sisyphus, that greek bastard of the underworld, is probably smiling a bit like that, just as I did on those cold, crisp mornings at Ocean Beach.  It makes me smile now, and wish you the best of luck in the days ahead.  Thank you.

2 Replies to “Thank You Sisyphus”