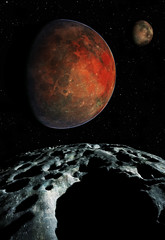 Watching the Curiosity landing last night I was in awe of the technical accomplishments on display, of course.   However in the subsequent press conference(s) I was also struck by just how desperately political our space program has become. NASA is continually fighting for it’s budgetary life and the symptoms of this are evident in just about every press release and media event they hold.

I can’t help but wonder what our space program’s history would be like if things were somehow different.  If… say… Mars was different.  The sad truth is that for the average lay person Mars became largely uninteresting as a result of our planetary exploration program.  Prior to Mariner 4 the Red Planet was a frontier of mystery and wonder.  It was the Barsoom of Edgar Rice Burroughs imagination, populated by strange mysterious aliens, beautiful women and ferocious warriors.  But, alas, the reality was disappointingly dry and sterile, and has resisted all our attempts at discovering even the most remote hint that life in even the most microbial form may have existed there once upon a time.

But, what if… what if instead of the Mars we know, we had found a verdant planet teaming with life and just such alien beings?  Would America and the world still be as apathetic as we are today?  It’s a tantalizing alternate universe … one in which I suspect the current apathy about manned space exploration would be refreshingly non-existent.