Freedom of Speech .vs. The Right To Be Heard 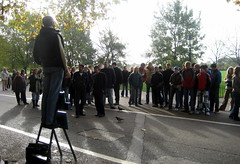 “Ender’s Game” is a Hugo-award winning sci-fi novel by Orson Scott Card.  And deservedly so – I loved it, and enjoyed all five of the follow-on novels he wrote in the Ender universe. But Card is also a well-documented opponent of homosexuality and gay marriage – a moral stance that I find abhorrent and hypocritical.  And he’s getting worse as time passes.

The problem is that I became a fan of his work before I knew any of this.  Ender’s Game really is a great book, and there’s an Ender’s Game movie in the works that looks very promising; but for Card’s politics, I’d be eagerly awaiting it’s release.  And I find a part of me wanting to say that as long as he keeps his politics out of his professional life (i.e. his fiction writing), there’s no reason I shouldn’t do just that.  But…  his livelihood and the celebrity that go along with it are what provide the platform from which he preaches.  And I believe those preachings are a destructive force in the world.

Everyone is entitled to their opinions, and they are free to voice those opinions from whatever platforms they have at their disposal.  But if we disagree with them, and happen to find ourselves directly or indirectly helping to amplify their voice, it is our duty to turn step away.  Thus, it pains me to say that I won’t be going to see Ender’s Game next year.  Or buying any more of Card’s books.  He’s just become too much of an asshole.  Damn it.