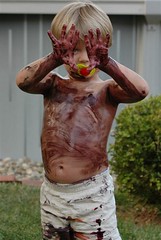 Having a kid is an enlightening experience in many ways.  One of the unexpected benefits for me has been how it brings into focus my own shortcomings, both current and past.  The process of asking, “What can I teach my child?  What are the really important life lessons they need to learn?” requires introspection, and produces answers varied and many. There are, of course, the classics like, “Toasters and scissors don’t mix” and, “Why poop is not paint.”   But I think every parent has that list of Really Important Things They Learned Later Than They Would Have Liked, where the really interesting stuff lies.

One of the items on my list is,  “how to recognize your inner moral compass”.

I went through a good portion of my life knowing how I was supposed to behave – everyone around me was telling me what to do and what not to do – but in some ways that was just an invitation to explore all the stuff I could get away with in spite of the rules. Where could I push the limits with no consequences?  And so when it was convenient, I shoplifted, I lied, I cheated, and probably a few other things.  Hell, I even set fire to a National Park once (sorry about that, Yellowstone!) Mind you, none of this was too serious.  Misdemeanor stuff, at best… but… still.  It’s not the sort of thing to be proud of.  And I’d be lying if I said I was doing this to explore the boundaries of what I was allowed to do.  No, I just liked the perks that came along with stealing, lying, and cheating.  And the fire thing – well, I’m just a pyromaniac at heart.

But I was acting on all this because I wasn’t listening to my moral compass.  I wasn’t paying attention to that voice that says, “You know this is wrong.”

Ideals are easy when there’s obvious consequences.  You just don’t do things that will hurt people.  But there is a lot of middle ground where there’s no tangible consequence to compromising ideals.  Piss off a stranger in passing, someone you never see again – where’s the harm in that?  Toss a cigarette butt out your car window – a street cleaner will (probably) pick it up.

Or, as happened to me  this morning, send a rude email to a company that doesn’t deserve it – who really cares?  It was while I was doing my usual morning inbox sift that this happened.  I got not one, but 7 (seven!) spam emails from some company I’d never heard of  inviting me to join their service.  I shot off a quick and fairly rude reply telling them to leave me the hell alone.  It was only a few minutes later when I read a friend’s email telling me about this great new service he’d signed me up for to manage the 7 (yes, seven!) projects we’re working on together, that I realized where this “spam” had come from.  They were invites from my friend.

So… ‘guess I was wrong to bark at that company after all.  But so what? It’s not like there was a real cost to anyone. The company will just chalk my message up to some ignorant user getting confused.  And I really didn’t have the time to follow up with another email explaining the mistake.  No harm, no foul, I could just ignore this little transgression and go about my day, right?

… and that’s when I heard it, “You know you were wrong“.  Something in my subconscious was telling me that this was important.  This was a violation of some conviction I held.  Regardless of how trivial this seemed, I needed to pay attention.

The lesson I’ve learned, and that I hope to teach Dash, is that our convictions are important regardless of the circumstances, and we will be confronted by them at unexpected times, in the most seemingly trivial of ways. But that doesn’t make how we act trivial.  Our awareness of where our ideals and convictions lie and the way in which we act on them are what define us.  To act in accordance with them makes us better, stronger.  To violate them, especially when we do so consciously, is a compromising of self that is soberingly destructive.

That, in a nutshell, is the inner moral compass.  It’s the voice inside you that tells you when you’re headed in the wrong direction.

I don’t now how easy this will be to teach my son.  I know my parents tried with me.  I remember in particular my dad saying, “to thine own self be true”.  (Repeatedly.  I certainly gave him plenty reason to!)  But it took me a long time to realize this is precisely what he was talking about.

So, we’ll see I guess.  And to some future Dash who may be reading this, “Pay attention to what that voice is saying.  And enough with the poop painting!”

One response to “Lessons To Learn”